Running Roan Tack from the beginning, as told by the founder...

I was a resourceful child. As a high school student in the 90's, I bought and resold used tack to help financially support my horse activities. I purchased inventory at clearance sales, barn sales and tack swaps. I mainly bought vintage items and quality brands. Then cleaned the items up and resold them on a Geocities website that I coded and managed. Yeah, I was one of those geeks who taught myself HTML so I could write my own Geocities website. When I turned 18, I was finally old enough to sell on eBay and I was introduced to a wide world full of people that wanted to buy what I was selling. But as eBay evolved, people could easily list their own used items for sale and I found it increasingly difficult to find inventory that I could turn for a profit.

Not one to be discouraged, I changed my approach and filed for a business license so I could secure dealerships to sell brand new merchandise. I received my official paperwork from the state of Oregon dated September 9, 2002. I named my business Running Roan Tack after my barrel horse at the time, a red roan freight train named Myra.

Myra had a Cinderella story to match her bigger than life personality. Bound for the slaughterhouse because of her nutty tendencies, I brought her home on April 4, 1998 as a four-year-old. Being young and stupid myself, I wasn't afraid of her hijinks, crazy moves or intense speed. She decided I was her person and she wasn't comfortable letting anyone else handle her. She was my once in a lifetime heart-horse. In 11 years, we had too many epic adventures to count. It was always "Heather and Myra"...you never got one without the other one. Competing in barrel racing and other speed events, checking cattle on the farm, hairy trail rides in the mountains and galloping through the waves of the Pacific Ocean, Myra did it all with me. I was right there with her when she passed away suddenly on December 1, 2008 in a freak accident that could have killed me too, but Myra took care of me until the end. I miss Myra every day, but I'm proud that she lives on in my heart and in my business, Running Roan Tack, that I named after her. 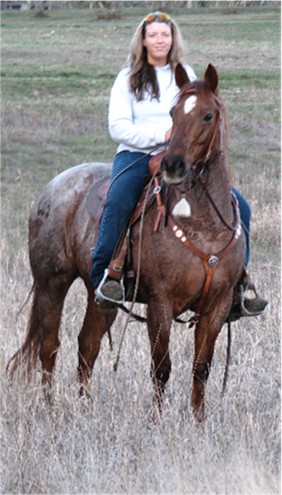 My current mount is AQHA gelding, Power Pays, affectionately known as "El Patrón". He's the good looking bay roan you see modeling products all over this website. He's a special boy who has done well filling some pretty big shoes. 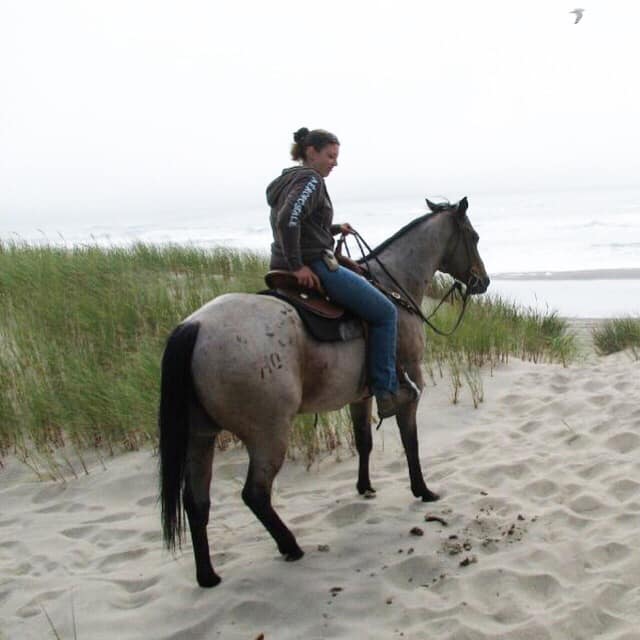 Back to business, in it's infancy, Running Roan Tack was just another retailer buying merchandise at wholesale and presenting it to the masses via eBay, my own ecommerce website and vendor booths at shows. Wholesalers at that time didn't know what to do with small online-only businesses like mine, as they still favored accounts with a traditional brick-and-mortar store. But I had built a strong following, an impressive online presence and a track record for turning over merchandise and representing it well. So I was able to secure dealerships that would have otherwise been off limits.

But as the recession settled in, wholesalers relaxed their rules and opened accounts to anyone with the right paperwork and the ability to meet a minimum opening order and I soon found it difficult to source merchandise that was different from what everyone else was selling.

Again, not one to be discouraged, I began the transition from retailer to manufacturer. This was a big leap, but I had ideas. Lots of them. And I was excited to see those ideas become tangible products.

As a seamstress and avid crafter, I was experienced in sewing textiles, but leather was new to me. I taught myself leather work, bought tools and a leather sewing machine and finally debuted a small line of my leather goods in 2009. I didn't want merchandise that looked like what everyone else had...I'd already played that game. I focused on introducing new designs, while not sacrificing quality. I kept at it tirelessly and got my first booth at the National Finals Rodeo in Las Vegas in December 2012.

The expansion and machine purchasing continued until I had outgrown my little workshop in Canby, Oregon. I was ready for a change of scenery and able to relocate to anywhere I wanted.

By now you've probably realized that I appreciate a challenge. They shape us and allow us to grow, especially for people of the creative sort. I decided to leave everything and everyone I knew and move to Texas. By myself. Just me and my horse, El Patrón.

I landed in Stephenville, Texas in the spring of 2013. I unpacked my machines and supplies into a 2,400 square foot shop...4 times larger than the shop I left in Oregon. My new shop was so empty. And expensive. I'd made a scary jump, but I wasn't going to let fear keep me from experiencing this opportunity for all it was worth.

I buckled down and worked hard, filling that 2,400 square feet with supplies, machines and employees. I dropped all my outside vendors and now only represent the unique products that we make in our shop. I expanded our product line to include a wide range of leather goods with a continued focus on uniqueness, durability and function.

In 2017, I took the next step and purchased a 2,800 square foot shop on a piece of land outside of Stephenville. It was fixer upper...four insulated walls on a slab of concrete with a roof and a bunch of garbage and that’s it. No power, no water, not even a driveway to access it from the road. 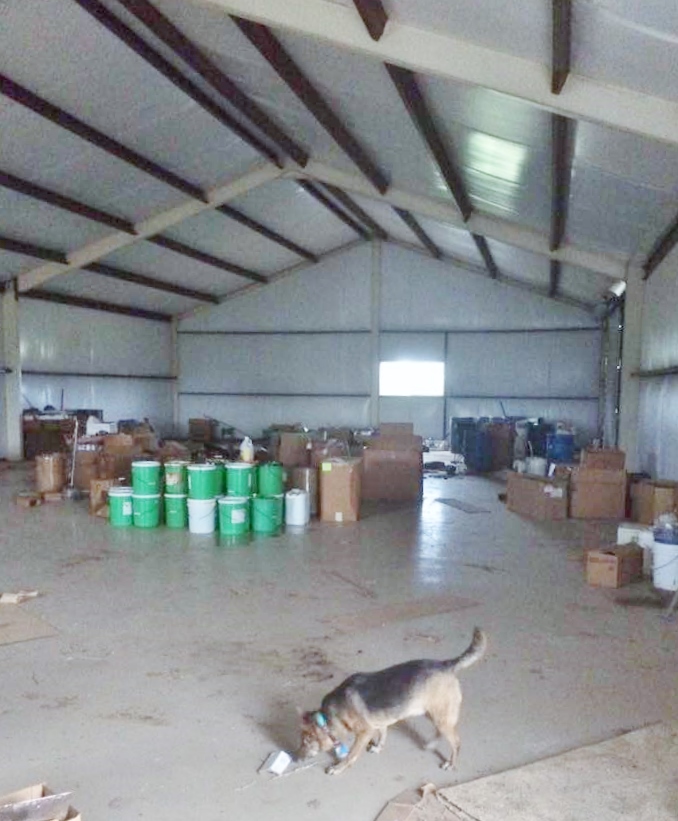 The condition of the shop on the day I closed on the property.

Not one to back down from a challenge (do you see a theme here?), I took on the project because I could see the potential. After drilling a well, stringing power to the site, installing lights and running water inside the building and doing everything thing else necessary for habitation, we moved in after returning from the NFR at the end of 2017. My business finally has a permanent home. 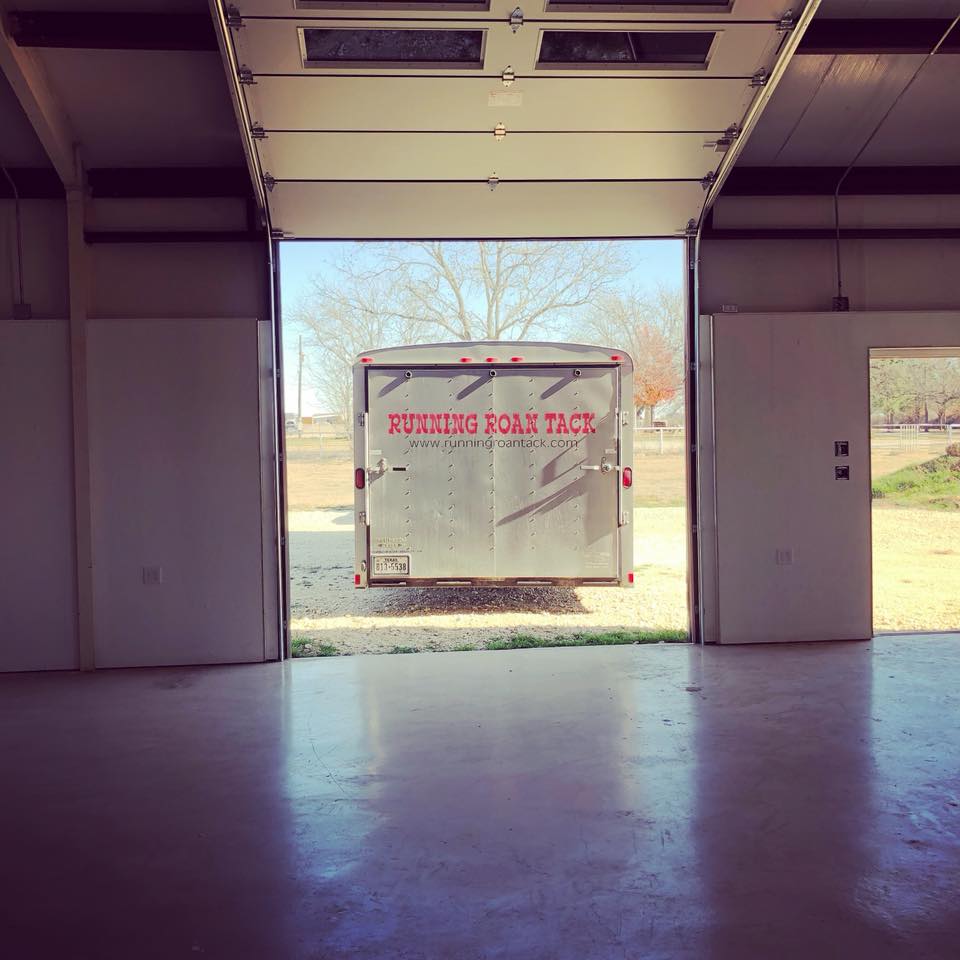 First load of stuff into the new shop (December 2017)

I still focus on designs that are different, but cohesive. My style evolves as expected, but I typically get excited about interesting shapes, clean lines, textures, pops of color, respectful repurposing, vintage concepts and things that aren't mainstream. That last one hurts me sometimes because I don't jump on every trend bandwagon. If it's not my jam, I don't do it. People appreciate that authenticity.

Mine was not a meteoric rise to the top. It's been a daily choice for two decades to do better, have faith and trust in the process. I'm still a maker at my core and I despise sitting in an office, so I spend as much time as possible working production on the shop floor. And we are busier than ever thanks to our wonderful customers all over the world who love our stuff as much as we do.

I'm a farm girl from Oregon who gave it a shot. Dream big and go for it.

We are currently shipping to USA and Canada only.